My Mom was famous for this recipe in our family. She would buy a bushel basket of sweet, white corn from a local farmer and spend all day putting it up in 2-cup bags to freeze. What a job! One skillet is work enough. Mom never used milk, only water, because she felt it took away from the corn’s sweetness.

In a large bowl, place a smaller bowl, turned upside down in the center. Hold a corn cob upright on the smaller bowl. Use a sharp paring knife to shave the tops off of the corn kernels by cutting in a downward motion and letting the kernels fall into the bowl. Using the blade of the paring knife, go over the cob scraping out the milk of the corn. Go around the cob several times to make sure all the milk is out. Pour corn with its milk to a clean bowl, making sure you get all the pulp and milk out of the large bowl. Once the cobs are shaved and milked, you should have about 6 cups of creamed corn.  Heat up a large non-stick skillet to medium- low and add vegan butter. When it is hot, add the creamed corn and water. Stirring often, you want to bring this to an easy boil for about 15 minutes. You want to cook down the sugar in the corn and let it thicken up. If it begins to thicken too fast just add more water. Taste for salt and pepper. 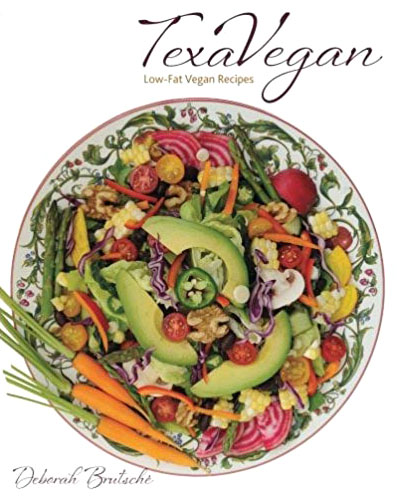 Delicious food!
My very favorite cookbook.
Rethinking "Vegan!"
A must have for every kitchen!
Informative, versatile and
teeming of recipe inspiration.
Full of easy and deliciously
fun recipes!

Deborah Brutsché believes in uncomplicated meals. Through the power of simple and satisfying recipes, Deborah has created a connection for people who are on a journey to healthier living by choosing a diet that is free of animal products. She gladly embraced the challenge of giving her traditional, Southernstyle cooking a vegan twist. Deborah was influenced by her mother’s and grandmother’s family recipes.

Raising a family in Dallas and now living in Austin, Texas, her cooking is influenced by the distinctive flavors of the Southern U.S. and Mexico and new influences from her multi-cultural family.